***PLEASE TAKE NOTE THAT THERE IS CURRENTLY NO ACCESS TO THE BOTTOM OF WEBSTER’S FALLS ***
Please check here for updates: https://conservationhamilton.ca/spencer-gorgewebsters-falls/

Webster’s Falls is a curtain waterfall 22 metres in height. Located at the Spencer Gorge / Webster’s Falls Conservation area in Greensville, its source is Spencer Creek. It is one of two falls within the Spencer Gorge, and with a crest of 24 metres, it is the largest in the region. It is also probably the most popular and widely known fall in Hamilton, and has the biggest park associated with a waterfall. According to Joe Hollick, Webster’s Falls has the highest number of vintage postcards bearing its image, suggesting that it was also the most frequently visited waterfall a century ago as well.

This waterfall was originally known as Dr. Hamilton’s falls, after Dr. James Hamilton purchased the land in 1818. (He was also the first president of the Canada Life Insurance Company as well as medical officer for the Great Western Railway.) The waterfalls and 78 acres of the surrounding land were purchased  by Joseph Webster after his family arrived from England in 1820. According to the Hamilton Conservation Authority (the current owner), the Webster family manor still stands on Webster’s Falls Road, and their gravestones have been preserved in a small section just off the Bruce Trail, on the way to Tews Falls.

According to romantic legend, an Indian maiden named Na-Go-She-Onong (Evening Star in the Ojibway language), fell in love with a white man. Her lover was killed by a jealous Indian suitor, and rather than live without him, she pressed his dead body to hers and plunged into the roaring waters of Webster’s Falls. A poem about the ill-fated couple was printed in a souvenir booklet put out by the Women’s Wentworth Historical Society. Click the images below to read the poem. 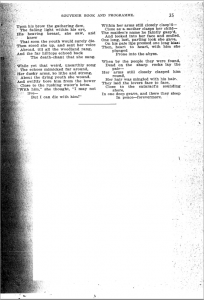 In 1856, Webster’s son built a large stone flour mill, the Ashbourne Mills, along the creek above the falls. Until an 1898 fire destroyed them, the mills buildings ranked among the largest of their type in the district. In the wake of the blaze, the owner, George Harper, joined a partnership to organize the Dundas Electric Company. One of the first hydro-electric generators of Ontario was installed at the base of the falls. In 1917, the Public Utilities Commission of Dundas bought Webster’s Falls and the surrounding lands for the town’s waterworks department.

When the will of former Dundas Mayor Colonel W.E.S. Knowles was read, it was learned that he had made a bequest to the town so that the area around Webster’s Falls be made into a public park. A foundation was established to channel revenue into park improvements. In 1933, the grounds were landscaped, a stone bridge constructed across the creek above the falls, and an iron fence installed to make the viewing at the ledge much safer.

According to the Great Lakes Waterfalls and Beyond site, Webster’s Falls shows up in the Sci-Fi movie “Descent”, playing the role of an anonymous waterfall in the Pacific Northwest. A river of lava pours over the falls, nearly killing the star, Luke Perry.

I have a facinating story that happened to me in September 2007 regarding Webster’s Falls.

My wife and I met a Russian professor in London England, who now is teaching in  England, by the name of Oleg Polyansky (http://www.mwl.sci-nnov.ru/polyansky.html)

When we first met, he asked where we were from and we said Canada. We asked him if he had ever been to Canada and he said yes, he had done some research there at the University of Waterloo for a few months. We then said that we were from Hamilton which is about an hour from Waterloo. His very next comment was: “There is a waterfall in Hamilton!”

Both Marilyn and I were stunned. By him describing the waterfall and location we determined that it was Webster’s Falls. He then went on to say that he was part of a team that had discovered water vapour on the sun (  http://solar-center.stanford.edu/news/sunwater.html ) when he was at Waterloo.

We did not know whether to believe him or not, but when I returned I checked the internet and found the above two sites. The first is a picture of him and the second article talks about his discovery.

The last amazing fact is: When he does a talk anywhere in the world about “Water vapour on the sun”, he shows a slide of a waterfall – and guess which one it is – Webster’s Falls in Hamilton!

How to get there

Directions and more information can be found here: http://webstersfalls.ca/
Or refer to the Hamilton Conservation Authority page: https://conservationhamilton.ca/spencer-gorgewebsters-falls/

Sign up here to keep up to date with waterfall illuminations, events, etc...